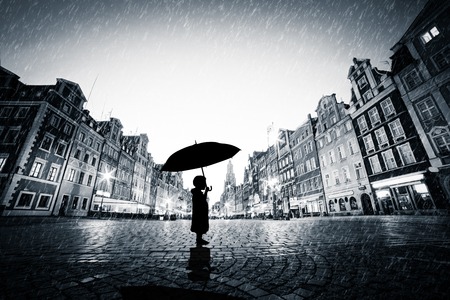 “….The little boy searched everywhere for his mother. There was torrential rainfall. His tears mingled with the rain as he looked through the sheets of heavy rain all around him in the dark lonely street, calling out for his mother, ‘Mama! Mama!! Mama!!!‘.

He was shivering. His only clothing was a tattered dress that clung to his body. His bare feet in the muddy pool of water. His small umbrella barely covering his head, hardly a shield in the strong windy conditions.

The street was lonely because of the rain. Everyone had their kids locked indoors. Yet he was not afraid. His courage stemmed from his desire to see his mother. The only woman he knew. The only friend he had. The only person in the world he could trust. She had left him in the hut while he was asleep. He had woken with a scream at the sound of the thunder-clap. He had searched the hut thoroughly with frantic eyes to no avail. He hoped to see her somewhere in the streets.

With his vision impaired by the rain, his skin cold and shivering, his steps unsteady, his legs dirty in the muddy pool of water, umbrella in hand, in a lonely dark street, the little boy felt all alone in the world.

He stood still for a moment, and summoned the little strength he had left inside him and screamed at the top of his voice, ‘Mama! Mama!! Mama!!!‘. His voice was lost in the sound of the heavy rain. He became slightly petrified. The sudden thought that he may have lost his mother chilled him to the bone.

His hands became suddenly weak, loosening its grip on the handle of the umbrella, and the strong wind blew it out of his hands into the distance. He turned around, his eyes following the swiftly departing umbrella. His only companion, taken away from him.

He felt his legs buckle. Then he slowly collapsed in frustration and despair in the pool of muddy water, and sobbed uncontrollably….“

7 Replies to “….and the Little Boy Searched for his Mother.”

This site uses Akismet to reduce spam. Learn how your comment data is processed.